First and foremost, we want to thank all of the clubs for being actively engaged in this process. We realize that the ruleset is a technical document to read and parse, and on top of that it only gets used in its entirety at 1 or 2 tournaments each year for most people. The ongoing evolution of the game is primarily done within your clubs and at all of the amazing tournaments you stage throughout the year, but we have to attempt to codify standards so that at a competitive level there is safety, fairness, fun, and excitement.

Before we go into the details of the voting results, we wanted to share what’s come to light from the many conversations we’ve had during this process. The future of refereeing and ruleset management is a constant topic of discussion. To that end, here is a short list of projects and process changes that you can expect to see in the coming years:

If you’d like to get involved in any of these efforts, you are always welcome to join the team!

Overview and how to read the results:

The flagrance rule update has passed. 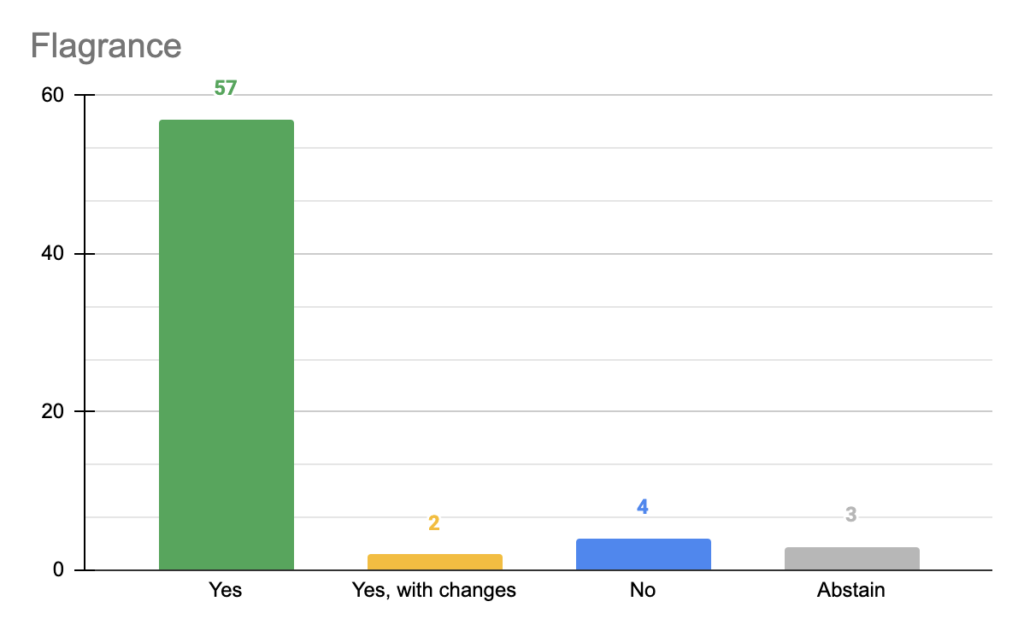 This update will hopefully hold every player on the court to a standard of play where physical contact is executed safely and strategically. There were no changes proposed that were actionable, so those votes were counted as “No.” The final adjusted count remains the same as cast: 57 Yes, 6 No, 3 Abstain. 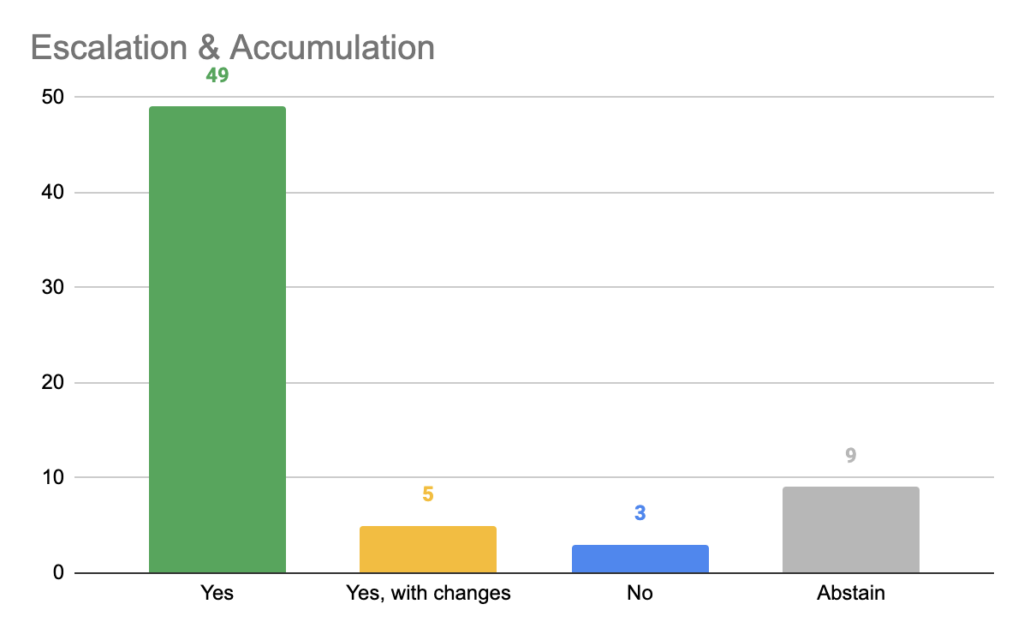 There were two suggested changes that are actionable:

Our response to the first suggestion, is that 6.1.2.1 does state that a Referee does not have to assess a ball turnover and may assess a Minor or Major regardless of if the player dabbed, based on a number of factors at the Referees discretion. If we removed language from 6.1.2.1 or 6.1.2.2 it would remove ball turnovers from the game entirely, which we fully support, however, it would potentially change how other clubs voted. We will not be incorporating that change. This suggestion didn’t feel like enough to change the vote from a ‘Yes’ to a ‘No’.

In regards to the second suggestion, we can absolutely provide a template for qualifiers or any other tournament so the Scorekeeper can track goals and infractions. We counted this suggestion as a ‘Yes’ vote.

Of the “Yes, with changes” votes, there were 3 that were either actionable or already included in the rule, and 2 that we cannot incorporate into the rule without it significantly impacting the other votes, so we are counting those as “No” votes. The final adjusted vote count after incorporating changes or “rejecting” changes is 52 Yes, 5 No, 9 Abstain. 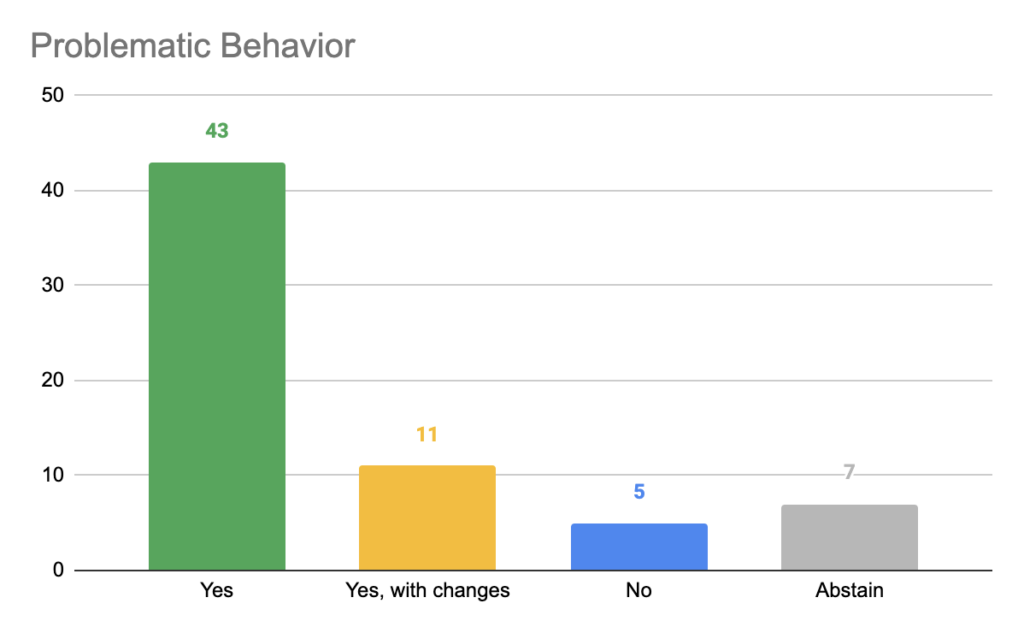 There were many suggestions and concerns in regards to this rule. Here are a few paraphrased points that were made, and some actionable suggestions:

This is all great feedback and input. NAH will work to provide a more formal process (along with producing the Code of Conduct in question) which will include a template that will standardize the process and help to protect the individual(s) who are invoking the rule from any further harm. The way the rule is written, there was no expectation that the player invoking the rule would have to reveal more personal information than needed, and they can even have someone else raise the concern on their behalf to remain anonymous.

In regards to the tournament organizers or NAH having the sole responsibility of determining player eligibility, we would argue that is a step backwards. Often there is a majority of players competing in the tournament who feel uncomfortable with someone who is there, but the organizers cannot empathize and therefore will not act on the concern. This process is not intended to be a “trial of peers” but rather a platform for everyone in the tournament to have an equal voice where they may have had no voice at all in the past. We firmly believe that the NAH cannot act as a court and that tournament organizers are much too small of a group to bear this burden either. We will not be making that change to the rule at this time, however this is what we will do: NAH will help put together a working group to evolve this rule with additional voices in the room. It was a group effort for this first draft, and we hear you loud and clear that perhaps a second look is warranted. That is fair, and we will work to make this happen before qualifiers if possible, but it may take time to find common ground.

An updated version of the proposed rule will be published in the final release, but we are committed to reassessing it when the working group feels ready to make changes.

Of the “Yes, with changes” votes, there were 5 that were actionable, and 6 that were not actionable at this time or went beyond the scope of what can be done within the ruleset specifically. The final adjusted vote count after incorporating changes or “rejecting” changes is 48 Yes, 11 No, 7 Abstain. 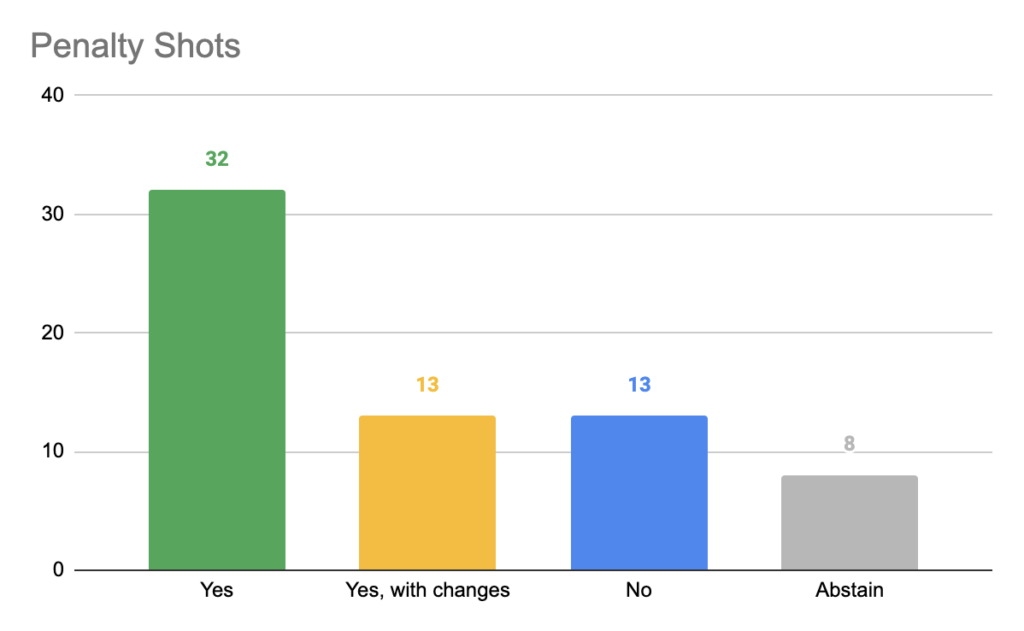 There were a few consistent suggestions/questions:

These are all valid suggestions, and because of the volume of them, we will incorporate them into the rule. Additionally, the rule states that play is dead after the penalty shot occurs, and outlines exactly how play will restart. There was some confusion around whether play would begin immediately as if the ball is live after the penalty shot, but this seemed too unpredictable at this point in time. The updated version of the proposed rule will be published in the final release of the ruleset.

Of the “Yes, with changes” votes, all of them were actionable and their incorporation would likely not change the other Yes votes. The final adjusted vote count after incorporating changes is 45 Yes, 13 No, 8 Abstain. 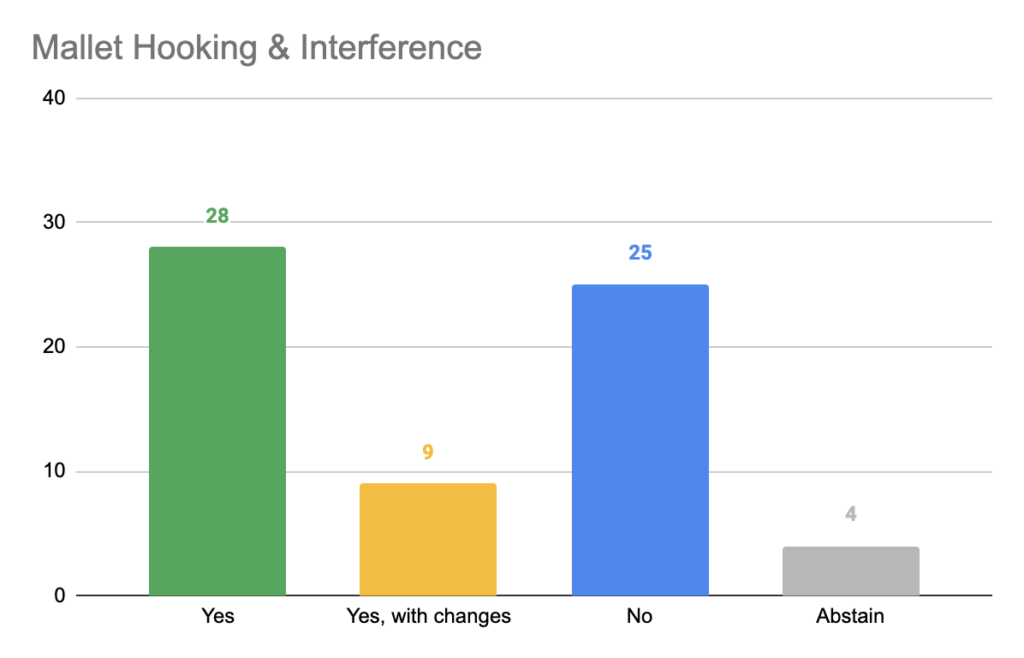 This was the most divisive of votes, and we received a lot of good feedback. We will do our best to paraphrase the common themes that were shared:

The majority of feedback came from ‘No’ votes, but we will focus our responses on the feedback that came from ‘Yes, with changes’ votes:

You may agree or disagree with the points made above and clearly the community is reasonably divided. Because of that reality, NAH is committed to voting on this rule again next season. Players will have time to try it out, find the boundaries of the rule, give us feedback and perhaps adapt in the same way they did with Interference/Obstruction. Consider this a pilot season for this rule, and hopefully next year we will be able to have individual players vote on this to get a better sense of how people feel about playing the game this way in a competitive environment.

Of the ‘Yes, with changes’ votes, we felt that 7 of them could be addressed and 2 of them could not. The final adjusted vote count after incorporating changes or “rejecting” changes is 35 Yes, 27 No, 4 Abstain.

The updated version of the proposed rule will be published in the final release of the ruleset. 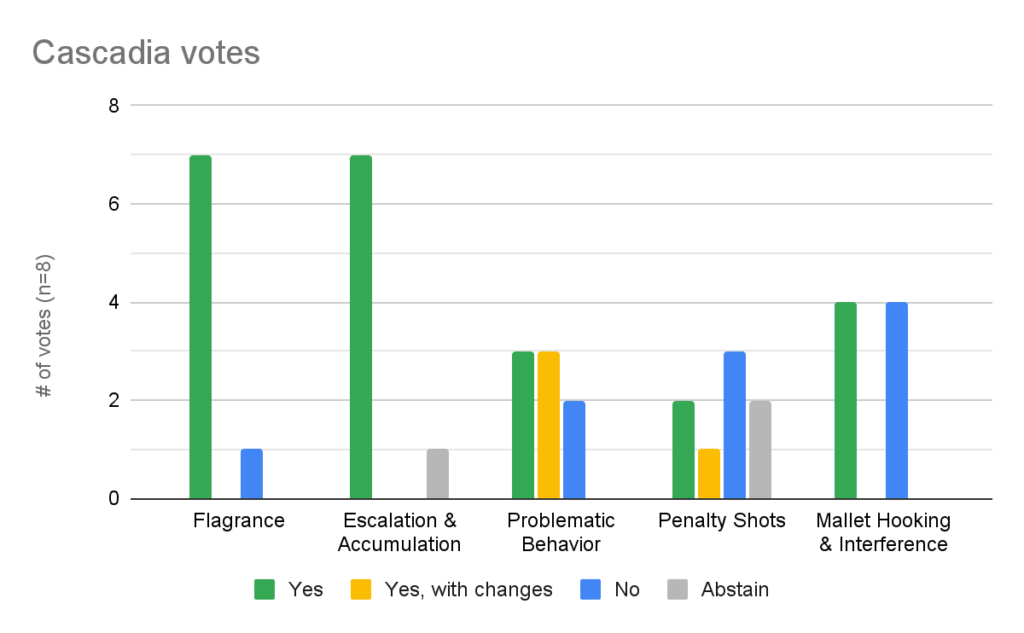 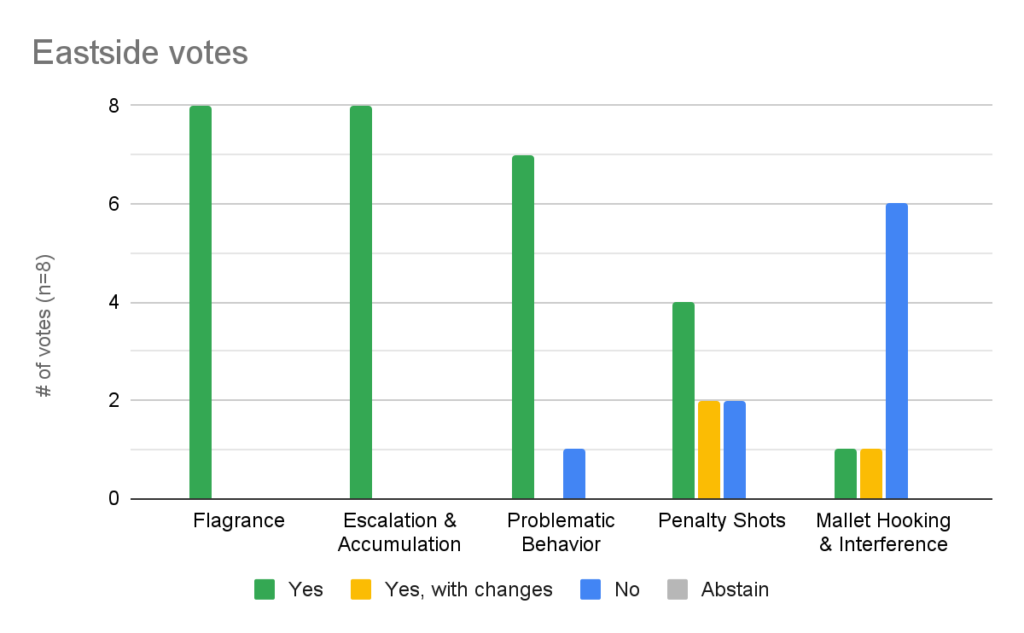 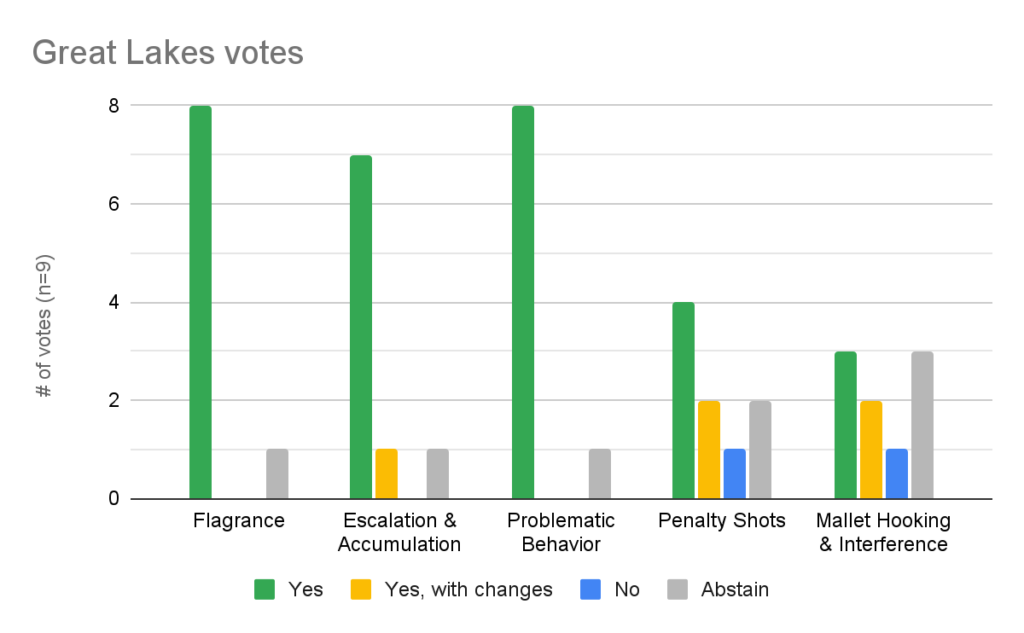 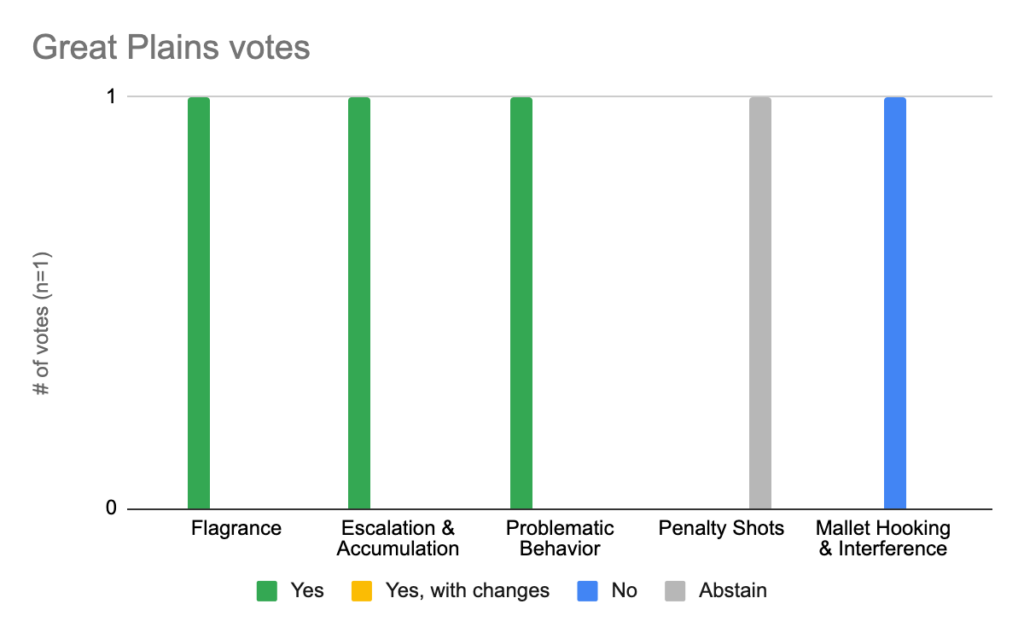 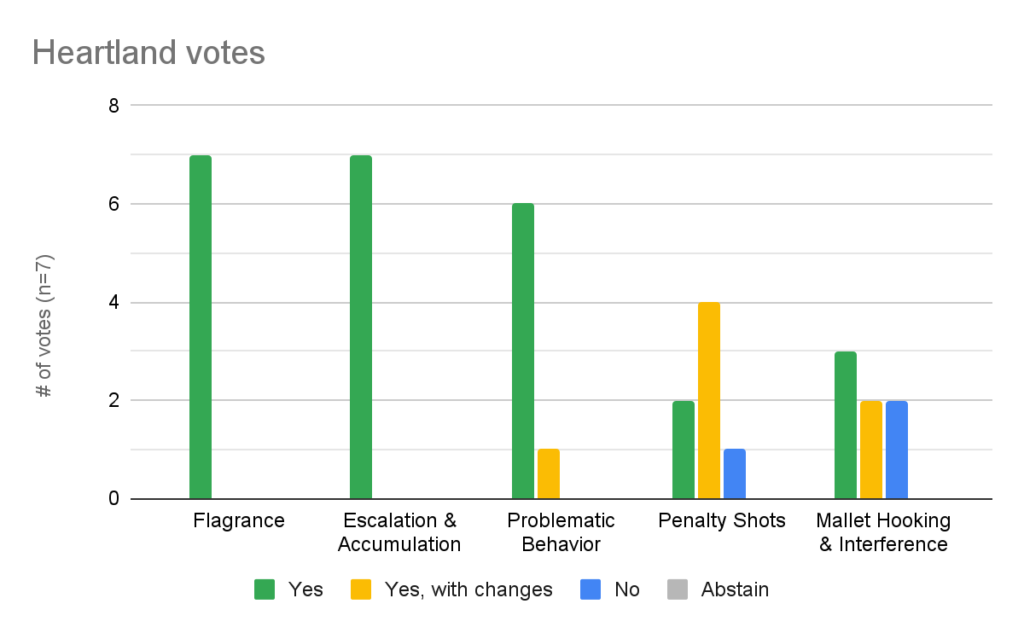 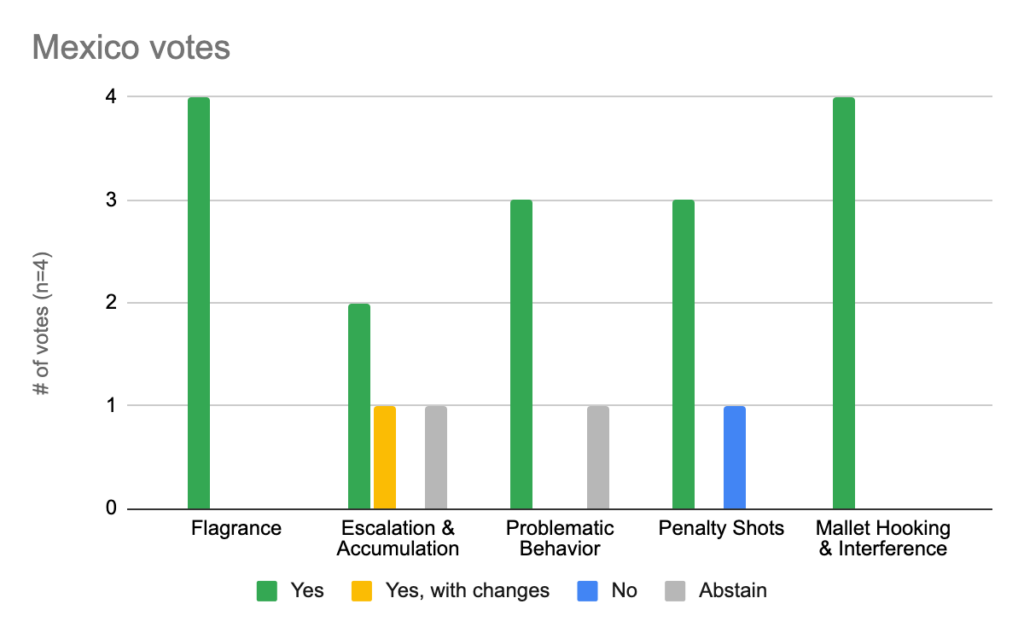 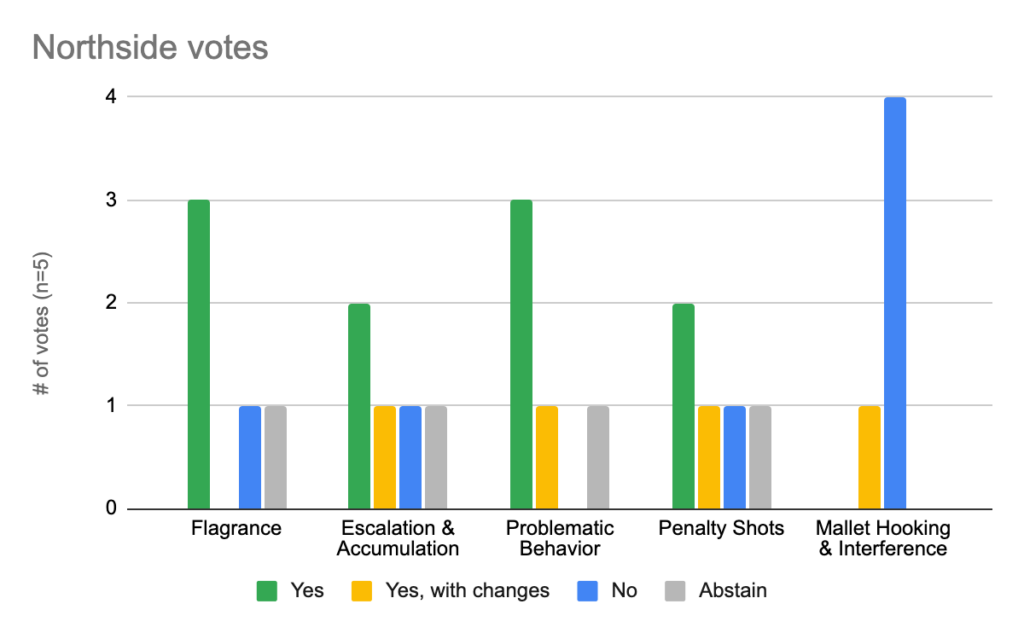 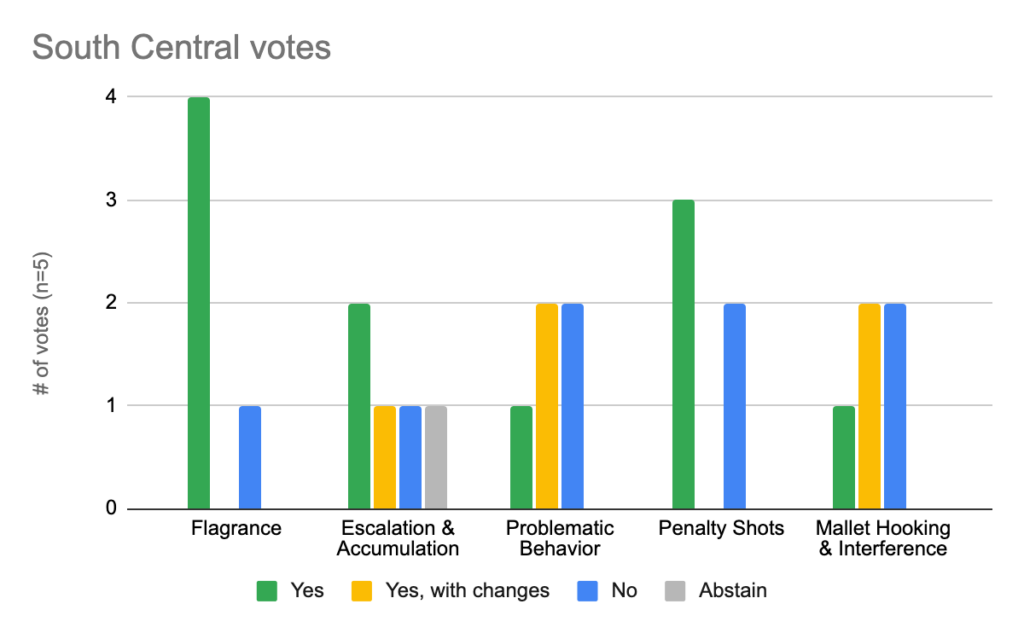 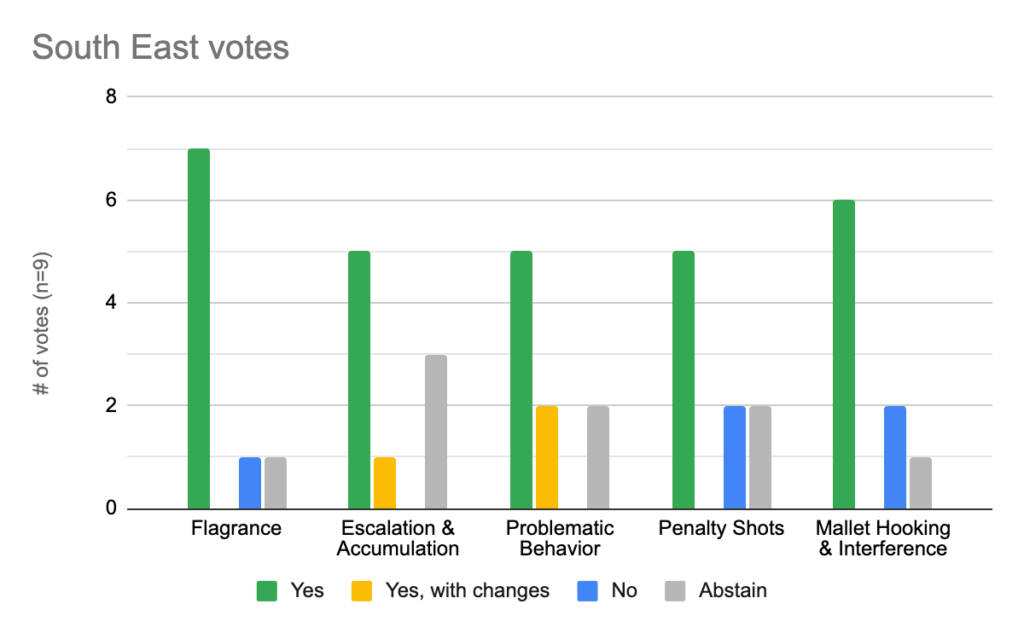 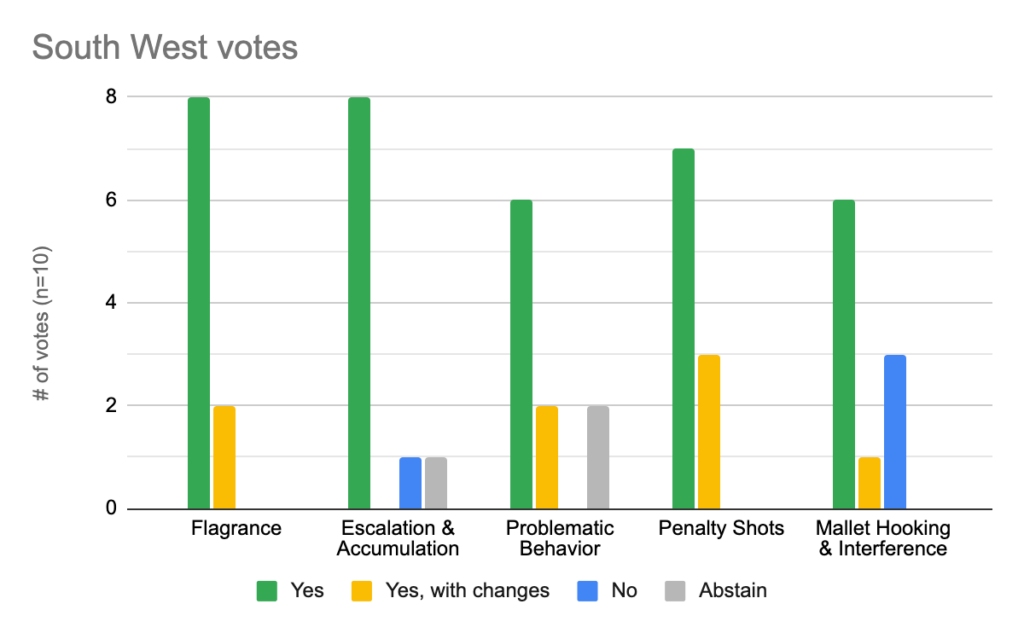 We have incorporated most of the changes mentioned above and published a first version of the 2022/23 ruleset here: https://nahbpa.gitbook.io/2022/ . Moving forward, we may take additional feedback to adjust wording, fix grammar or reference errors, etc., before it is finalized, but please use the updated version in qualifiers. The only rule left out was Problematic Behavior, as that is going to take more time to give it the consideration it deserves. Please email your Regional Representative or joe@nahardcourt.com with questions or concerns. 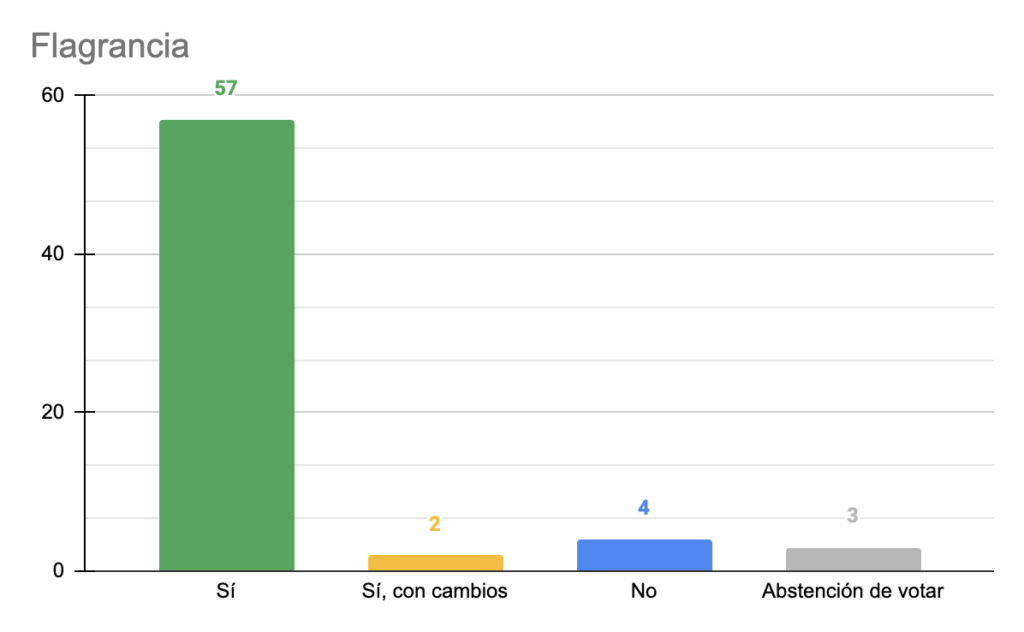 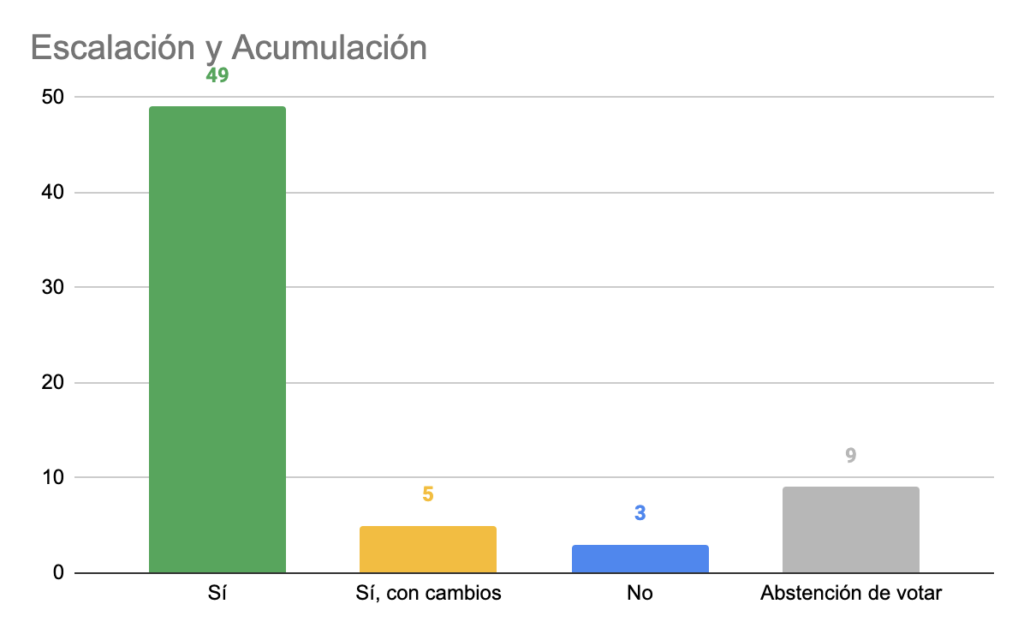 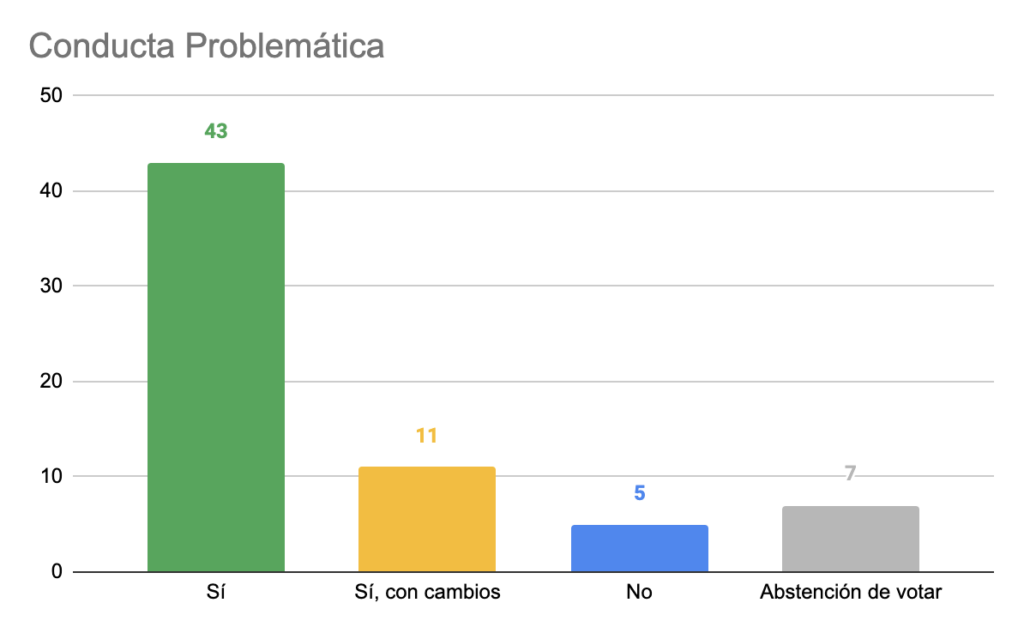 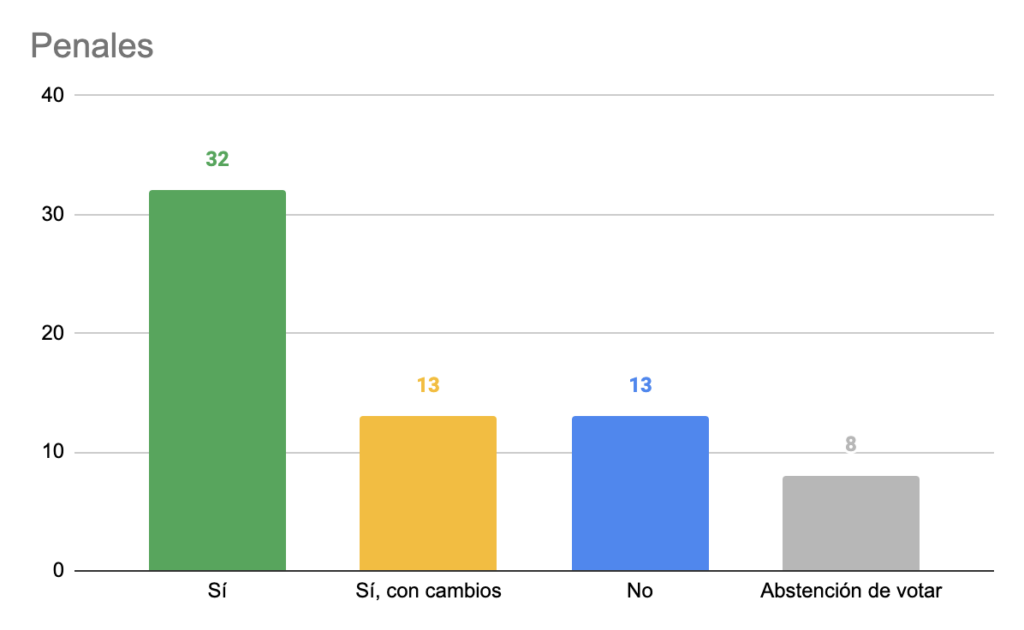 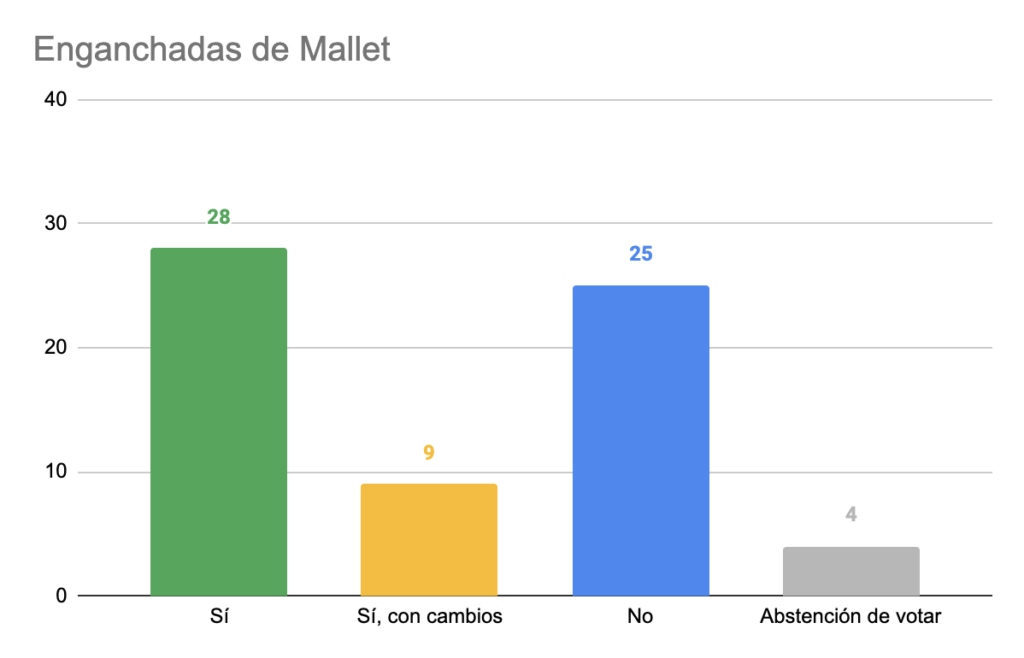 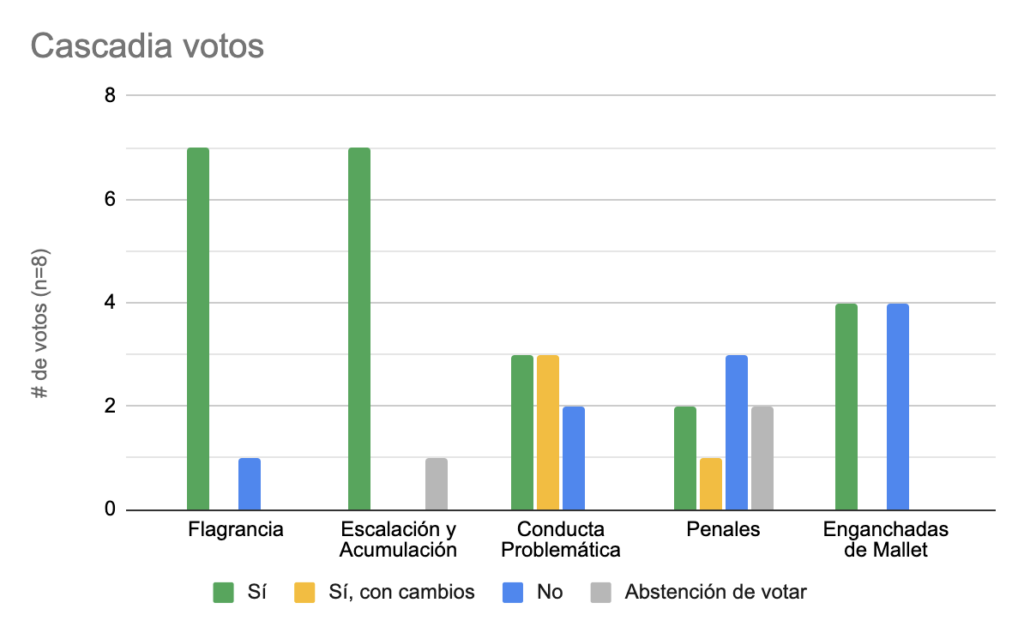 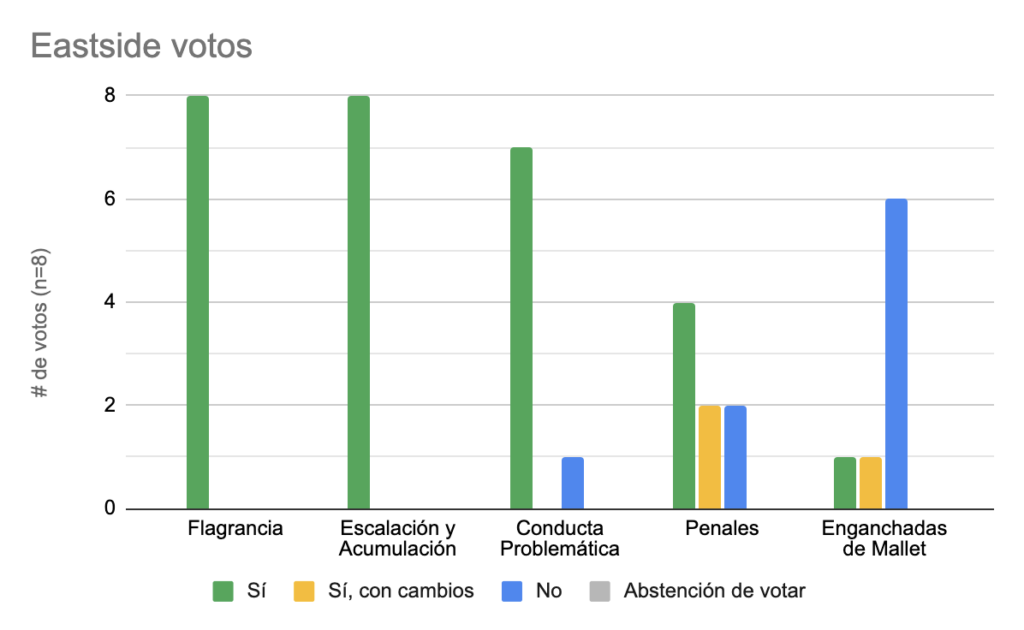 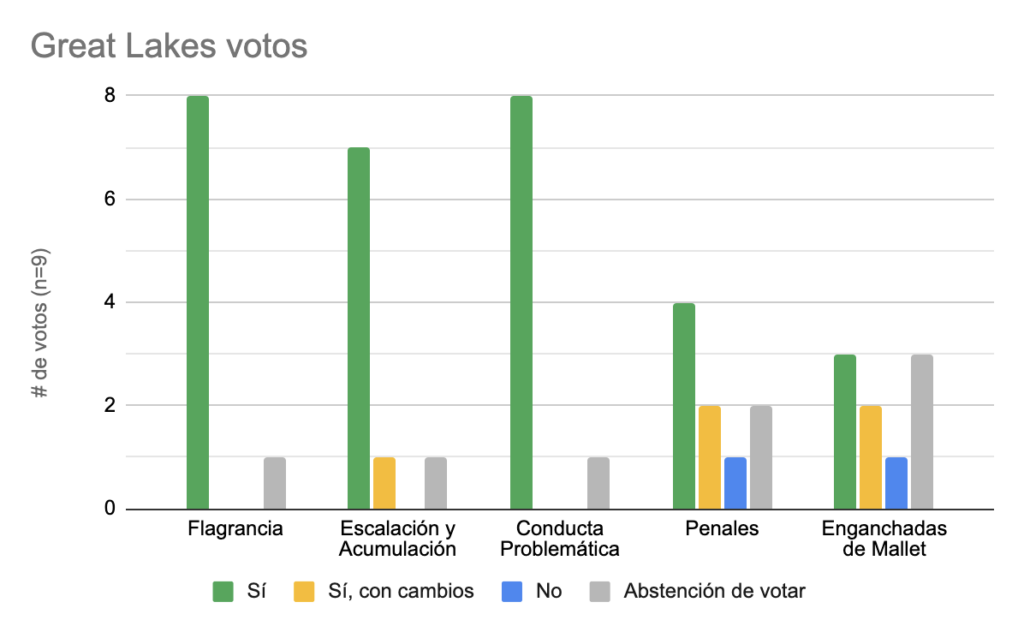 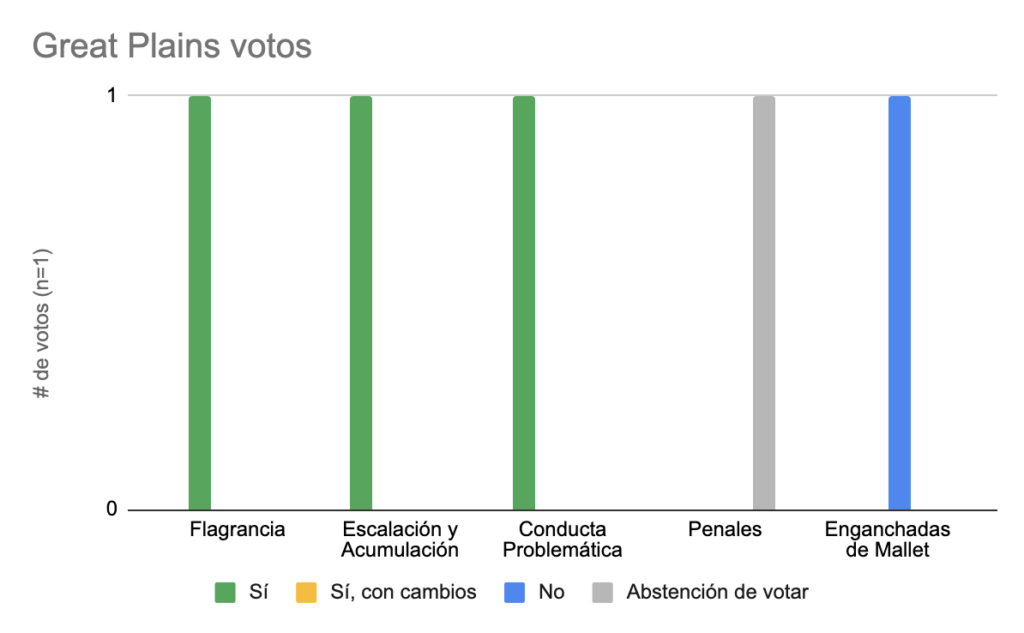 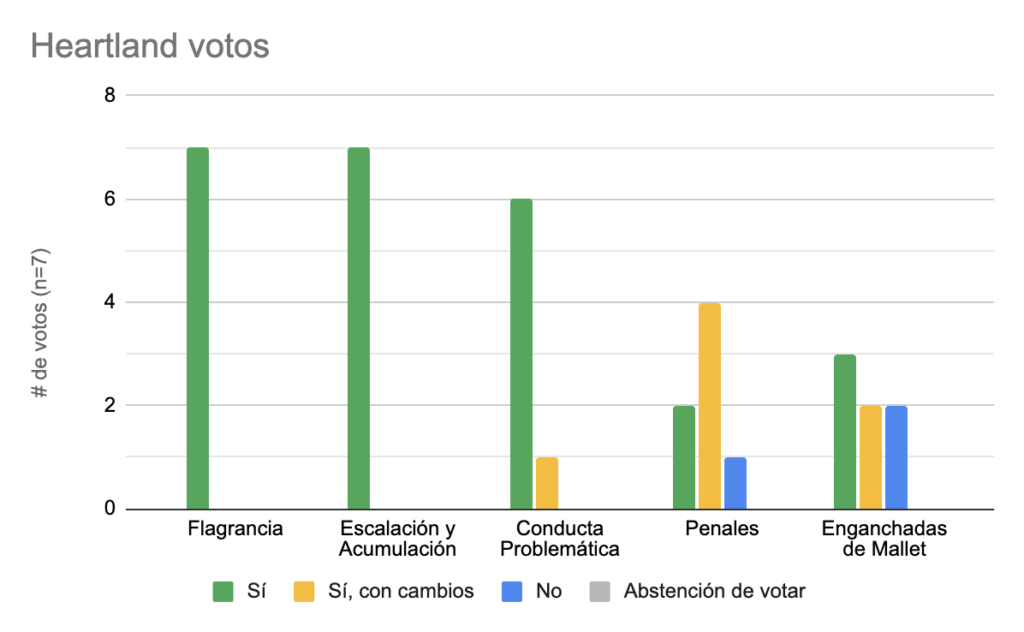 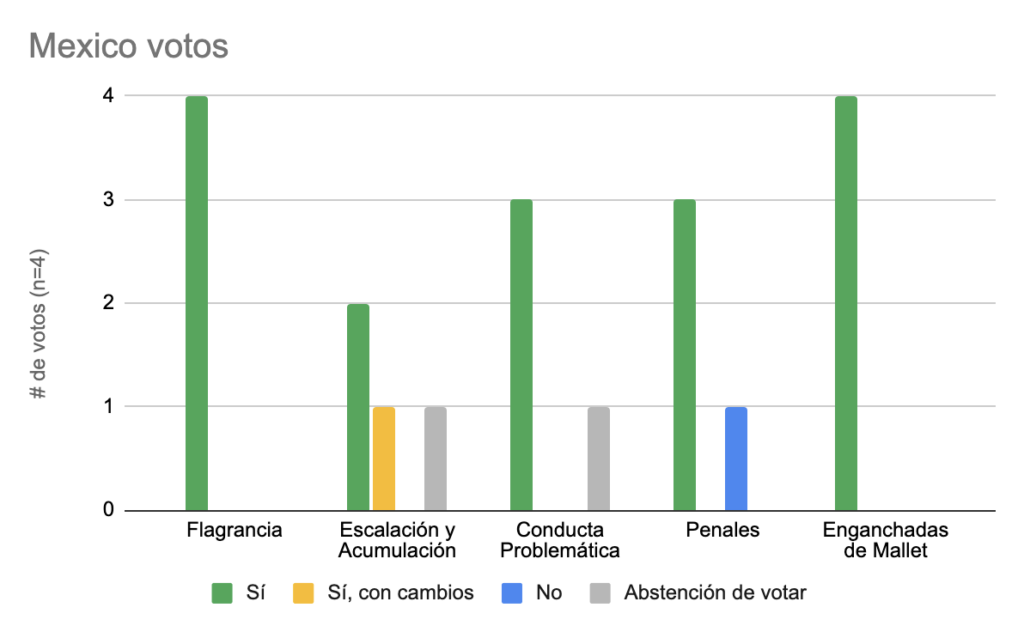 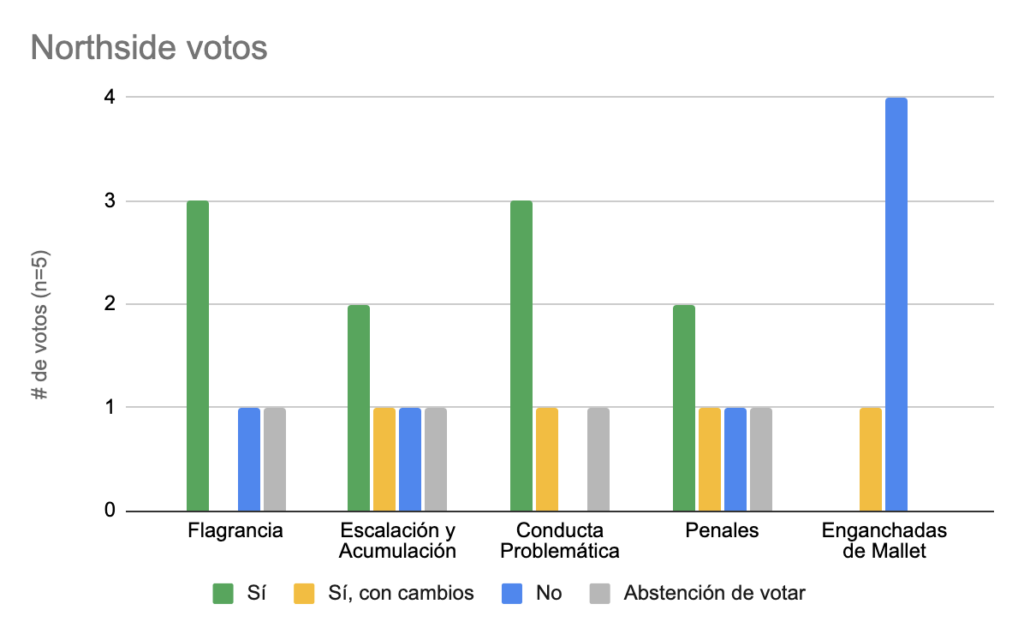 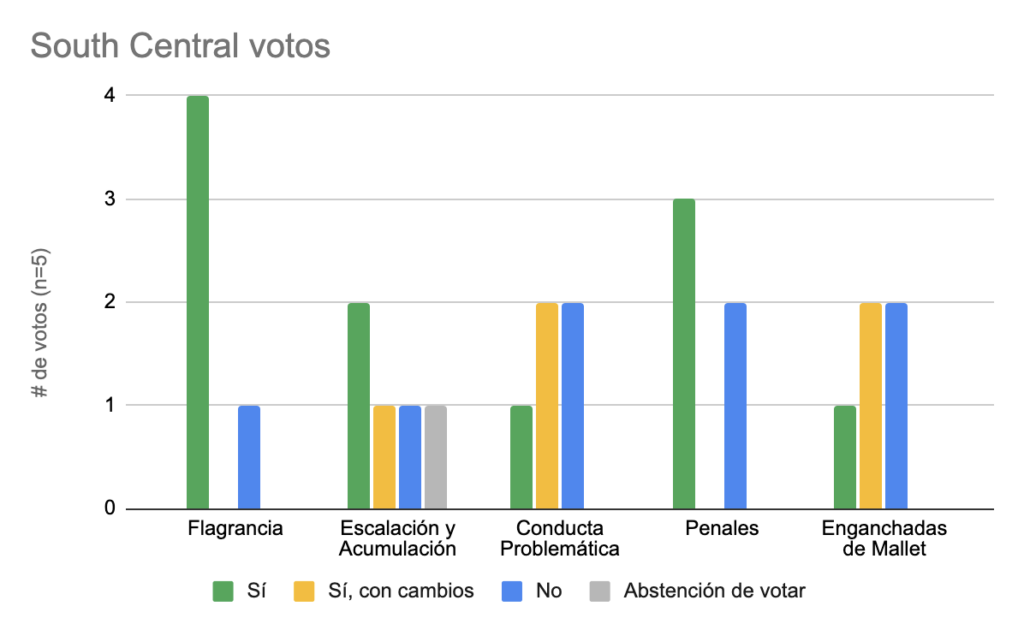 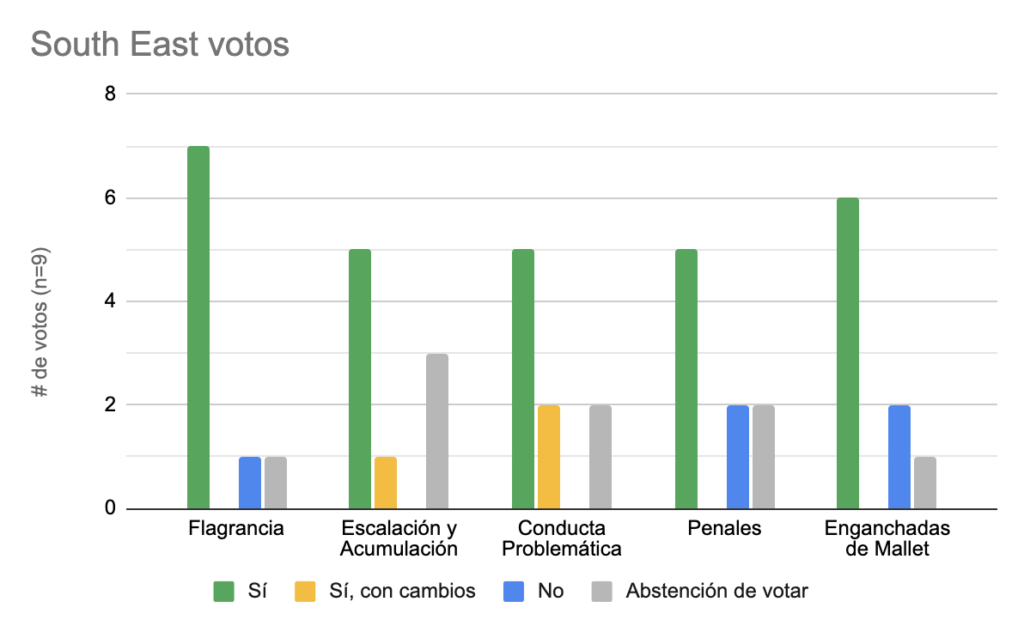 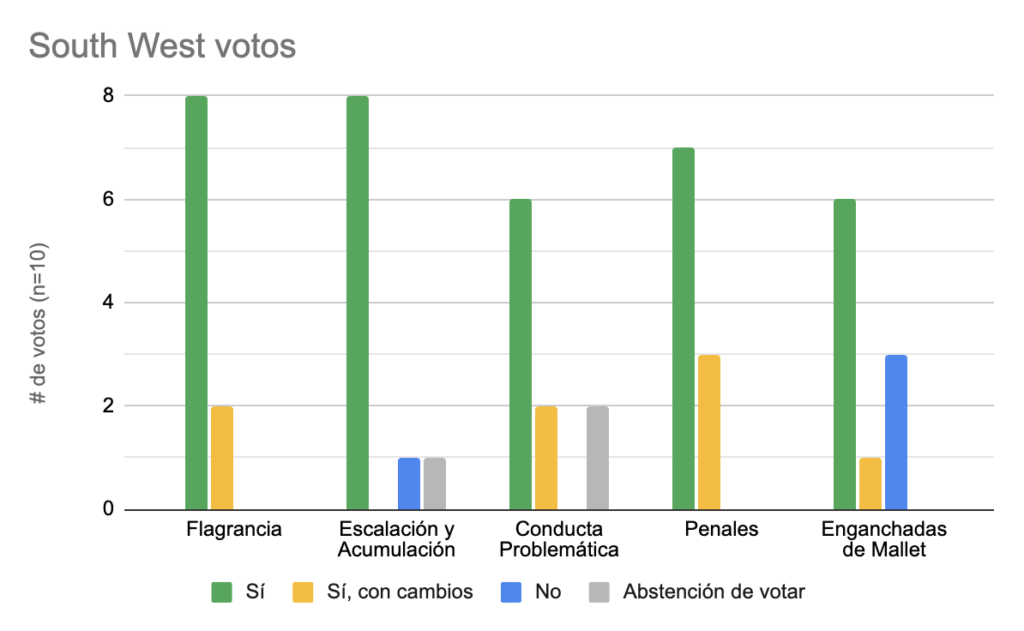