The NAH is pleased to announce that Frederick, MD will be hosting the NAHBPC 2017! The planning and coordination will be managed by the Lancaster United Bike Polo Club, with supplemental support from the NAH. The Hillstreet Park courts have long been a go-to in the Eastside Region for years. The two symmetrical courts have professional lighting, fast playing concrete, and full boards with fencing. Each court has two bench areas, one for each team, and each bench area has two doors onto the court for ease of access.

The main event will have 18 teams compete over the course of three days.

The NAH would like to introduce and announce its new regional allocation system, the Pro-Rated Ranking System. This post highlights the main reasons for changing the system and explains the new system in comparison to the old system to help everyone understand how NAH will allocate spots for teams from all ten North American regions this year and in the future.

The most important reason for the change is that the new system more accurately captures the strength of a region through collecting points for every team that attends NAHBPC and considers four years of performance, not just one, when allocating spots.

A more in-depth explanation of the Pro-Rated Ranking system can be read in its entirety here.

NAHBPC 2017 Regional allocation is as follows:

Regions are in the process of announcing their Qualifiers. Details can be found here.

Reminder that for all qualifiers you must adhere to the following “rules” unless your regions agrees to any variations:

A squad can have up to 6 players, but can only dress 5 of those players for each game. You must declare “in-region” wherever the majority of your players who are attending the tournament are located. You are only allowed to register during the “in-region” registration period for the region in which you have declared or otherwise fit into! If you want to register in additional qualifiers, you have to do so after the “in-region” window has closed.

*If you do have a roster of 6 people, use the same logic, but with the players who are traveling and planning on playing. So if you’re team looks like AAABBB, but you are only playing 5 people use the majority. If you are traveling and playing all 6, you can declare A or B but those 3 players must attend that tournament.

If your team decides to travel to multiple qualifiers and qualifies in both, you must choose the region for you to have “in-region” status.

If you only qualify out-of-region, you will represent that region and the points system will allocate points to that region.

For questions regarding the schedule, format or allocation, please contact Mark Aseltine directly at mark@nahardcourt.com.

On behalf of NAH and Lexington BP, we are happy to announce that WHBPC 2017 will be hosted in Lexington, KY!

Mark your calendars and start saving up your money now!  WHBPC main event will be a four-day event during the week of October 2nd, 2017.  Additional pre-and-post events may be coordinated in the months to come.  NAH will be launching a WHBPC website for up to date details for travelers including information on suggested airports, dining, housing, and a daily schedule of WHBPC events.  We are working on finalizing the total number of teams, and the continental allocation of spots for the event.

The tournament will be hosted at Coolavin Park on three co-located courts.  All courts are 120’x60′ with full 4′ perimeter boards and symmetrical court entrances.  The park offers some natural shade and shelter, and the courts have lights until 11:00pm.  The park is adjacent to local food vendors offering diverse dining options within walking distance to the event grounds.

Designated player bike parking with controlled access will be setup for players as well as a player’s grotto.  First aid, refreshment, admin, and media tents will be strategically located around the courts.  To establish a more festival atmosphere surrounding WHBPC, a children’s area and lawn games area will provide activities for players and visitors who come to the park.

WHBPC will be streamed live.  Details on the stream will be announced on a later date.

Lexington BP is one of the most established clubs in North America, and has a long history hosting major polo events.  They have hosted NAHBPC in 2015 and NAH Bench Championship in 2014.  Lexington has also hosted Ladies Army and events such as Fixcraft’s Fixcamp.  The club has already been a major contributor to the bike polo community, and they are excited to welcome players from all over the world.

With the NAH coordinating two majors in 2017, we feel it best to do a public call for volunteers to assist the real labor of fundraising and planning the NAHBPC and WHBPC.  The working group will meet online every two-three weeks to divide tasks and provide status updates.  The working group will be facilitated by me, and on occasion other members of the NAH board will join in the meetings to provide additional input if needed.  The work of this group will begin before the announcement of the tournament hosts.  This team will be the glue that works between the NAH and host clubs.

The group’s composition will be:

The tasks the group will undertake will be establishing 2017 sponsors, coordinating event logistics with the host club’s planning team (such as on-site amenities), marketing & media creation, and providing player travel guidance (suggested international airports, available lodging, local food options, and other needs).  Host club representatives will join the group as the host clubs are announced.  NAH volunteers may be players, retired players, or fans/supporters who are motivated individuals with strong communication skills and a dedication to make 2017 the best year ever for bike polo!  Experience in planning and hosting tournaments is preferred, but any experience with any kind of event planning or fundraising would be a major contribution to our efforts.

If you are interested in joining the team, please email me (alias@nahardcourt.com) with a brief summary of your skills and experience by 6pm EST January 1st.  No need for anything like a resume, just tell me about yourself and experience.  If you’re interested and would like to know more about what the commitments of the group will be, also feel free to send me an email, and we can chat about what kind of effort will be needed.  I believe that 2017 will be a year of polo revival!  Our greatest days are ahead of us.  Our best shots!  Our best heckles!  Our best friends!  This is your opportunity to make this year special for a community you love! 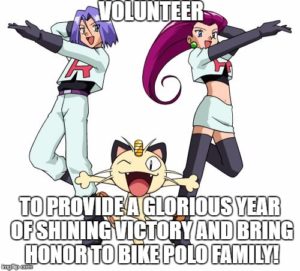 Early in 2016, Ben approached me about taking over the leadership of the NAH.  We had talked on many occasions about what mission the organization was best to address.  He was ready to step down, and I had some drive in me to make 2017 a year of polo revival and celebration.

But, let’s get this out of the way first…

A little about me for those who I’ve yet to meet on or off the court.  My name is Alias (pronounced “Ah-LIE-as”) Tagami.  I live in Washington, DC.  I started playing polo over five years ago when I randomly saw a NYC Bike Polo video on YouTube, and then went to watch people play at The Pit.  When I came back to DC, I was ready to find my local club and start playing.  Few players in my club with the exception of the Bruce Legend, are still playing in our current club’s roster.  Living in a city with a very transient population of players, we pride ourselves as a club that starts players and helps them grow.  As DC Bike Polo’s President, I’ve personally organized 8 tournaments, and provided support to several more in addition to helping our club establish the Dames of the Roundtable series.  With my experience in developing players and doing outreach as well as my close familiarity with the work involved in planning and executing tournaments, I knew I could help the NAH and the polo community with the next stage of our story.  But you won’t really meet me until you meet me, so if we’re at an event together, come say hi!  Show me your best trick on your bike.  The more useless the trick, the better.

Enough about me–this is about us. END_OF_DOCUMENT_TOKEN_TO_BE_REPLACED