I’m Joel Crandall based out of Asheville, North Carolina. I’ve been playing since 2012. Since then, I’ve helped officiate two World Championships, a handful of NAHBPC and regional qualifiers, as well as hosted a number of annual tournaments here in the Blue Ridge Mountains. I’ve been asked to step up as the new NAH Rules Director replacing Joe Rstom (Joe will continue to advise on rule development but play a less active role).

In the upcoming 2019 season, I plan to work alongside NAH and EHBPC leadership to draft a Rules Development System. This will clarify the process of implementing new rules and making amendments to existing rules. My goal is to have this system functioning by the 2019 World Championship in Cordoba, Argentina in September, however, no major changes will be tested for the 2019 season, as Qualifiers have already accepted the existing ruleset.

This Rules Development System will be the funnel which will help eventually create an International Bike Polo Ruleset in three languages: English, Spanish and French. I have ideas I will be sharing with the committee being formed to oversee this system, but my ears will always be at the club level.

I plan on being easily accessible in a professional setting while in this position. It’s exciting to participate in the bike polo community from a new perspective and I will do my best to serve the sport effectively.

Please feel free to contact me by email at joel@nahardcourt.com. 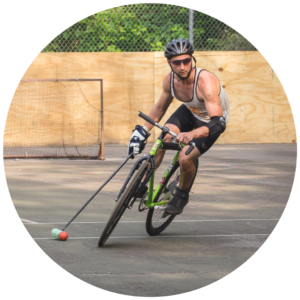